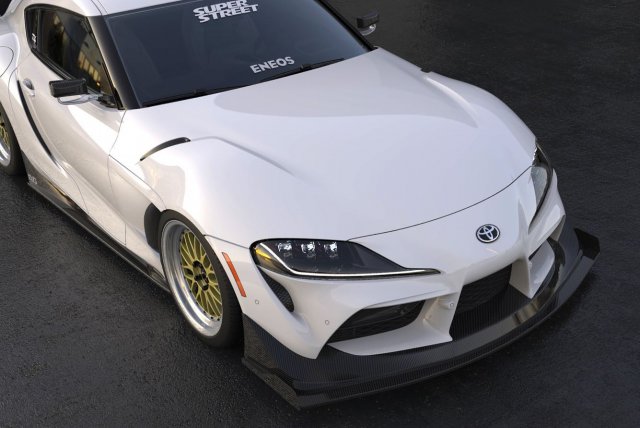 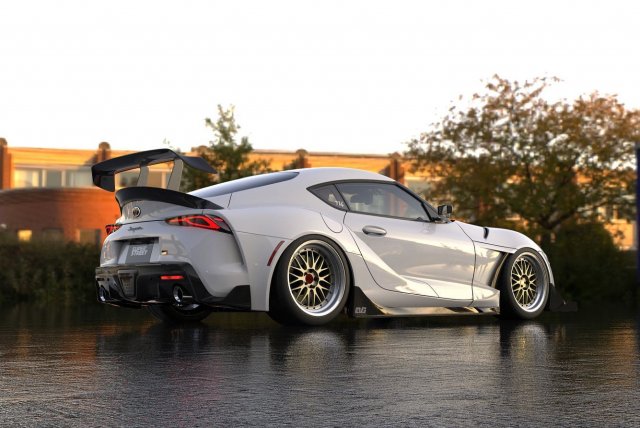 The annual SEMA show opens its doors in November, and this year's edition promises to be a Supra fest because it's the first held since the model made its long-awaited comeback. California-based Evasive Motorsports revealed photos of a "Fast & Furious"-style body kit it designed for the coupe.

Developed jointly with DuSpeed, the kit makes the Supra lower, wider, and meaner. It adds a sizable, speed-bump-eating splitter to the front bumper, side skirts, and a huge wing out back. Smaller door mirrors, and BBS alloy wheels add a finishing touch to the look. You might like it, or you might hate it, but one thing is for sure: It's not for those looking to keep a low profile.

We don't know what's under the Supra's long hood yet, or whether the changes continue into the cabin, but rest assured Evasive is well aware of the model's performance potential. Fully stock, the car comes with a BMW-sourced, 3.0-liter straight-six engine twin-turbocharged to 335 horsepower and 365 pound-feet of torque. It takes 4.1 seconds to reach 60 mph from a stop. Chief engineer Tetsuya Tada confirmed to Autoblog that quicker variants are on the way.

Evasive Motorsports isn't the first company to dress the 2020 Supra up in a body kit. Toyota's TRD division revealed some of the aftermarket parts it developed for the coupe in May 2019, and announced plans to sell them to Japanese enthusiasts looking for a visual upgrade. The full kit costs nearly $24,000 when converted from yen to dollars, an eye-watering sum that can also buy a nearly-new Volkswagen GTI. There's no word on whether that kit will come to America.

Pricing for the Evasive kit hasn't been announced, but we expect to hear more about it in the weeks leading up to the SEMA show. It's reasonable to assume that many other modified variants of the Supra ranging from mild to wild will bask under the bright lights in Las Vegas. European Auto Group (EAG) notably makes a 425-horsepower Supra with a six-speed stick.
You must log in or register to reply here.
Share: Facebook Twitter Google+ Reddit Pinterest Tumblr WhatsApp Email Link